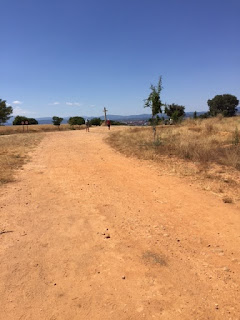 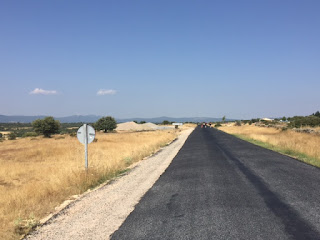 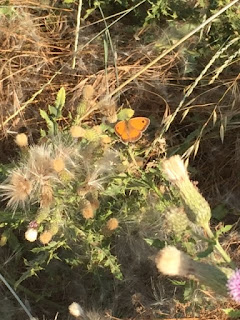 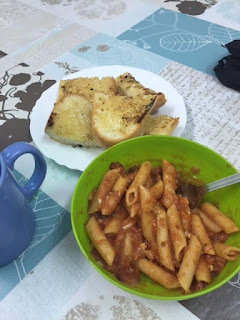 As I begin the time is 8:00pm and I'm eager to get to bed since the day that lays before me is a difficult one. But let's get caught up!

I left you having arrived in Astorga and the truth is that each day is such a blur that I can hardly remember how that day went. Save for the fact that it was a long one (31.9k) and my husband deserves a medal.

Generally speaking Lino's idea of "roughing it" is a 3-star hotel. This is something I've never given him grief for because, well, I like a comfy bed and room service as much as the next girl. So its what that in mind that I tell you that although I'm pretty sure he thinks I've lost my mind by returning to the Camino, he has been so incredibly supportive. And I made that 30+ day in large part because of his encouragement, especially those final, brutal, rocky, uphill, 11kms.

Since before I even left home he's told me to "enjoy your walk". Before I took off, I kept focusing on the "walk" part. Because let's be clear: "walking" is defined as the act of lifting one foot and putting it in front of the other, always having one foot on the ground. The Camino de Santiago is decidedly NOT a walk. It is in the truest sense a trek. "Trek" is defined as a long, arduous journey, typically on foot. Yes. It is THAT. The latter.

Webster's Dictionary aside he always reminds me to enjoy it, and that sort of hit me as I made my way in to Astorga. At one point I realized how hard my body was working to keep a certain pace, and then asked myself why. Besides the obvious desire to get out of the heat, to be finished for the day, or to avoid inclement weather, why am I not keeping a pace that is one notch down from that? At a speed that is 1km/HR slower that my "trucking it" speed, I'll add an hour or so to my day. Maybe it is indeed time to chill out a bit and enjoy it a little more. Of course sometimes the best way to alleviate the pain from blisters is to stomp them into submission...

And so with a new mindset about enjoyment, I checked myself into a 3-star hotel, ordered room service (don't kid yourself, it wasn't like at home) and streamed Netflix like it was my job.

The next day, which I took off, was mostly more of the same. The video which I took walking through town for some reason can't be posted here. So I understand that if were not Facebook friends you can't see it BUT I'm working on getting a YouTube link for it. So hang tight and I'll be happy to provide it.

With the exception of that little stroll, I mostly stayed off my feet and left them open to the air to heal. Some progress was made...and some of that progress was undone by today's walk. What's a pilgrim to do?

My night in Astorga ended with my hotel room (which overlooked a charming square) actually giving me a front-row seat to a parade and festival that was happening in town. Astorga, it turns out, has a rich Roman history which is being celebrated this weekend.

When I waked in late Aug through early October in 2013 I came across several town festivals with a similar vibe. In the summe you've got your Watermelon Queens and the Spanish have their festas, too.

So after 24-hours off, I got back in the saddle. And I've got to be honest, it wasn't fun. I chose not to stay at the hotel in Astorga which had a spa because I figured that if I treated myself to that extent I probably wouldn't go back out on the Camino at all. That thought was confirmed for me during the first 5k this morning. I felt rusty in almost every way. I think there's something about the centripetal motion they propels you down the Camino. Like a shark, keep moving or die.

Today there was quite a bit of elevation change as we entered the mountains but it happened so slowly over the 24k that there was never a climb I would have described as steep. That's my kinda climbing!

At the first town of the day I met a father and son pair from the Washington, DC area. We chatted and strategized together given that the forecast threatened rain right about the time that we would reach the final town for the day, as suggested by the guidebook. I kept a pace a little slower than theirs but one that brought me into the subsequent villages only about 10-15m behind them. So we caught up a long the way.

What was nice was that today was the first time it felt like there was a pack of us. I wouldn't call it a herd because there surely wasnt enough of us to use that term. But there was clearly a group of about 15-20 different pilgrims starting and stopping at the same places today and so we all saw each other throughout the day. It was really nice to have that kind of ability to recognize a friendly face, smile and wave even if you couldn't share a conversation because of language differences. It was the knowing smile of enduring the experience together. And THAT feeling, that experience, which I loved so much about my last Camino, and which has been lacking until now, made my day.

While my hope had been to push on beyond Rabanal to the next town, which I know to be a very steep climb, the weather had me thinking better of it and my body subtly told me that it wasn't prudent. Better to start at that climb tomorrow morning with fresh legs.

And honestly, I'm glad I stayed. My research told me that the Albergue Guacelmo in Rabanal was well liked and so I sought it out. I am not disappointed. It's an albergue run by the British national association of pilgrims and it is a charming mountain cottage with unrivaled hospitality. They warmly welcomed everyone as they arrived, sat you down (!), and then ran you through their drill.

They informed us straight away that they have 2 buildings and they group pilgrims by the time they plan to depart. The "early risers" and the "not", so that either way your morning in unimpeded by the other group. BRILLIANT, I tell you. They informed us that they're an all volunteer organization, identified who was working so that we knew who to approach, and told us that there was no fee, just a donation box. They said that one of their workers was a medic and that if you have any ailments you need him to look at that he'd be happy to do so. They asked about bedbugs. "This is a delicate subject", she said in a hushed tone. "Do you have any reason to believe that you've been bitten by bedbugs? We make it a point to stop them at the door, so we can help you out if you have any reason to think you might have an issue". She went on to inform us that there was a kitchen available for our use and that it's well supplied with pots and pans, olive oil, spices and the like. All you have to do it go to one of the little shops in town and get the main ingredients. (At this point I am already more than impressed). Finally she said "oh, and there's tea at 4:30". The woman next to me looked a little confused and the woman (Anne is her name) said "you know. English tea. Biscuits (cookies) and the like. Nothing big but if you'd like to join us out here, we'd love to have you. Otherwise do make yourself at home".

I don't even know what to tell you guys. SHUT THE FRONT DOOR. This place is amazing. I put what I thought was a generous donation in the box after she got us all checked in, but I think I'll be going back to make another contribution. They've been so friendly and accommodating, I'm just beside myself. What a wonderful pilgrim experience. (So if you're planning your Camino, do take note of this place. You'll be thrilled that you did).

So I settled in, took a hot shower, hand-washed my laundry and then put it in the "spin dryer". It's basically a salad spinner for clothes and I was shocked and what a remarkable job it did getting everything nearly dry. Which is especially wonderful given that it's threatened to rain all afternoon (but hasn't except for the light sprinkle I walked in for about 15 minutes).

I never cook on the Camino. I love to cook at home but it's just not worth the hassle especially since kitchens are typically so poorly equipped. But since this wasn't and I really was made to feel so at home, I wound up making a red sauce and pasta. And even though I made so much more food that I needed, it was a nice treat.

So now I'm getting ready for bed and mentally preparing for tomorrow. Cruz de Ferro (the highest point of the Camino) is about 10k from here, but it's a steep climb. I've chosen to stay with the early risers. My thinking is that even if I'm not a 5:30am starter tomorrow, I'll be woken up and be on my way earlier. Which will be a good thing.

It is cooler at this altitude of course and tomorrow morning I made need to start the day wearing my rain jacket as an extra layer. The high is forecasted to be 75. So if the rain holds off we should really be in business. Plus, I'll be reducing my pack weight by leaving the rocks I've been carrying at Cruz de Ferro. I'm really looking forward to that.

Blisters still suck, body hurts, but the mind and heart are strong. And so we carry on.