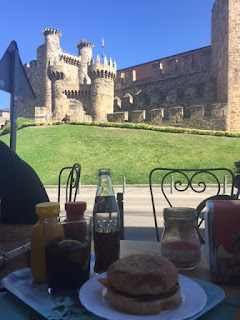 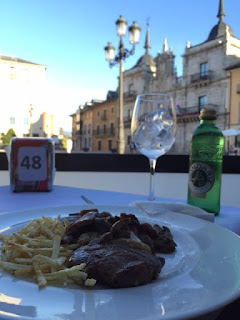 I wish I could write to tell you that my feet had a miraculous healing overnight and that I crushed it today. The truth is that the Camino made quick work of crushing me, and I surrendered.

I slept until 7:30a and have leaned that my morning routine of packing and bandaging can take a while. I was on The Way by 8:20am...and I could tell from the start that it wasn't going to be pretty. The blister that was ripped open on the bottom of my foot felt better than expected in the morning. Not that it was in great condition. So you'll understand by shock by the intense pain which came from the other side of the same foot. Yes, that's where Big Bertha lived but she has been healing nicely. But today it felt like my foot was deeply bruised. I mean, with every step I could feel the ache and the bones. What should have been an easy 7k through the suburbs of Ponferrada had me in tears. So when I arrived in this charming small city, I knew it was the end of the day. I hated even thinking it but I consulted the guidebook which informed me that the next lodging wasn't for another 18k. There was simply no way.

Ponferrada is not only a charming little city but it has a castle. No, really. A castle. The kind of Medieval looking thing with a moat! It was apparently built by the Knights Templar and it's still standing. Of course, there are now bars and cafe on this side of the moat, but all the more reason to call it charming I'd say.

So a little after 11am (after getting turned around in town, and then getting myself unturned around) I found an eclectic little spot professing to sell hamburgers. This is only the second place I've seen to do but these folks seemed to know what's up. They offered burgers with the options of cheese, lettuce, tomato, and bacon. This sounded promising. So I ordered one up and dared to push my luck and ask if they had Pepsi. They did. Perhaps God was smiling on my decision after all.